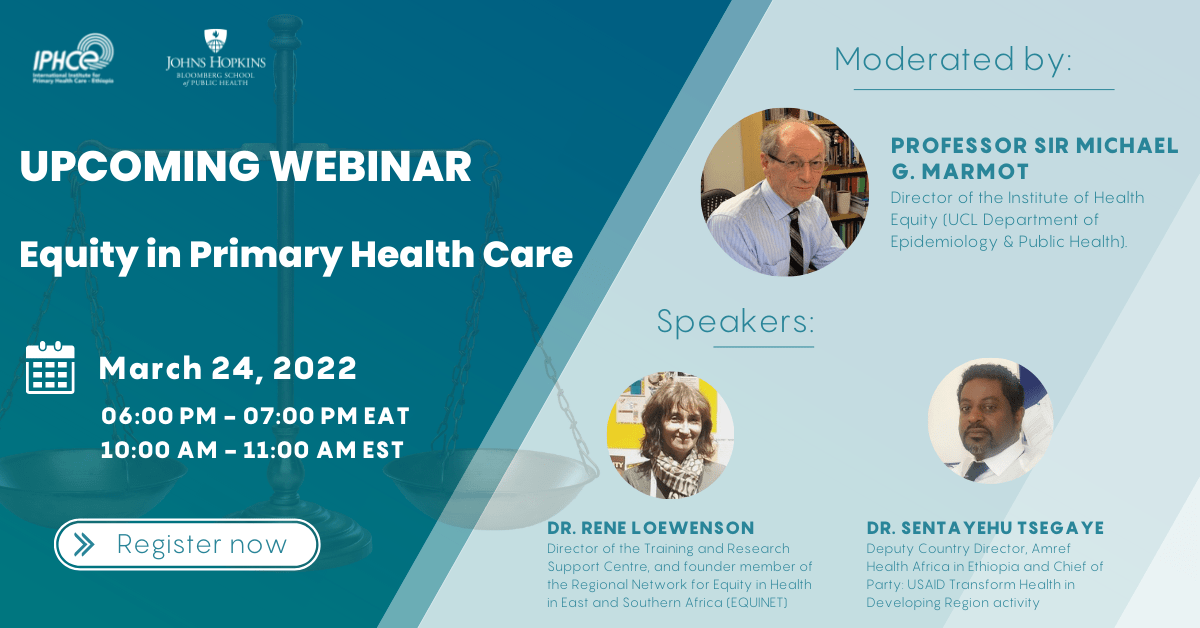 Join us for our webinar on equity in Primary Health Care as part of our series on strengthening Primary Care Systems in LMICs. This series is hosted by the International Institute for Primary Health Care, in collaboration with Johns Hopkins Bloomberg School of Public Health. Moderated by Professor Sir Michael G. Marmot, Director of the Institute of Health Equity (UCL Department of Epidemiology & Public Health) our expert speakers will discuss the latest developments in equity issues in PHC systems: our expert speakers will be joining us from Amref Health Africa in Ethiopia, and Regional Network for Equity in Health in East and Southern Africa (EQUINET).

Here is a brief introduction of our moderator and speakers:

Sir Michael Marmot has been Professor of Epidemiology at University College London since 1985. He is the author of The Health Gap: the challenge of an unequal world (Bloomsbury: 2015), and Status Syndrome: how your place on the social gradient directly affects your health (Bloomsbury: 2004). Professor Marmot is the Advisor to the WHO Director-General, on social determinants of health, in the new WHO Division of Healthier Populations; Distinguished Visiting Professor at Chinese University of Hong Kong (2019-), and co-Director of the of the CUHK Institute of Health Equity. He is the recipient of the WHO Global Hero Award; the Harvard Lown Professorship (2014-2017); the Prince Mahidol Award for Public Health (2015), and 19 honorary doctorates. Marmot has led research groups on health inequalities for nearly 50 years. He chaired the Commission on Equity and Health Inequalities in the Americas, set up in 2015 by the World Health Organization’s Pan-American Health Organization (PAHO/ WHO) and chaired the Commission on Social Determinants of Health (CSDH), which was set up by the World Health Organization in 2005, and produced the report entitled: ‘Closing the Gap in a Generation’ in August 2008. At the request of the British Government, he conducted the Strategic Review of Health Inequalities in England post 2010, which published its report ‘Fair Society, Healthy Lives’ in February 2010. This was followed by the European Review of Social Determinants of Health and the Health Divide, for WHO EURO in 2014; Health Equity in England: Marmot Review 10 Years On, in 2020; Build Back Fairer: the COVID-19 Marmot Review in 2021; and the Report of the Commission on Social Determinants of Health in the Eastern Mediterranean Region, for WHO EMRO, also in 2021.

Professor Marmot also chaired the Expert Panel for the WCRF/AICR 2007 Second Expert Report on Food, Nutrition, Physical Activity and the Prevention of Cancer: a Global Perspective; the Breast Screening Review for the NHS National Cancer Action Team, and was a member of The Lancet-University of Oslo Commission on Global Governance for Health. Early in his career, he set up and led a number of longitudinal cohort studies on the social gradient in health in the UCL Department of Epidemiology & Public Health (where he was head of department for 25 years): the Whitehall II Studies of British Civil Servants, investigating explanations for the striking inverse social gradient in morbidity and mortality; the English Longitudinal Study of Ageing (ELSA), and several international research efforts on the social determinants of health. He served as President of the British Medical Association (BMA) in 2010-2011, and as President of the World Medical Association in 2015. He is President of the British Lung Foundation. He is an Honorary Fellow of the American College of Epidemiology; a Fellow of the Academy of Medical Sciences; an Honorary Fellow of the British Academy, and an Honorary Fellow of the Faculty of Public Health of the Royal College of Physicians. He was a member of the Royal Commission on Environmental Pollution for six years and in 2000 he was knighted by Her Majesty The Queen, for services to epidemiology and the understanding of health inequalities. Professor Marmot is a Member of the National Academy of Medicine.

Dr. Rene Loewenson FRCPH is a Zimbabwean epidemiologist, public health practitioner and Director of the Training and Research Support Centre. She has since 1980 implemented research, participatory action research, policy analysis, training and mentoring of work and has led various international research consortia on equity in health, social and commercial determinants of health and health systems, on social participation in health, on policy change in family and child health and wellbeing and on public health law and practice, including in work on public health and COVID-19. She has worked on various aspects of PHC in Zimbabwe, chaired the Zimbabwe Public Health Advisory Board, is a founder member of the Regional Network for Equity in Health in East and Southern Africa (EQUINET) and cluster lead of its Equity Watch work, and co-ordinates the International Shaping health consortium working on various aspects of social participation and policy analysis in health. She has been a member/ chair of a range of national and global bodies on health, and advisor to various international consortia and processes.

Dr. Sentayehu Tsegaye MD, MPH,MBA-IB; is a public health Specialist with two decades of experience in Governmental, International NGOs, Private, Bilateral Donor organizations, and UN agencies. Through his ample experience in leadership and coordination roles, he offers a unique insight into the sphere of public health in low and middle income countries.

He has worked as a senior technical advisor for the Ministry of Health-Ethiopia, Senior Advisor to the Minister at MoH/Ethiopia, Country director for USAID/Challenge TB Project and Country Representative of KNCV Ethiopia, and is currently working as Deputy Country Director, Amref Health Africa in Ethiopia and Chief of Party of USAID Transform Health in Developing Region activity.

Do not miss the opportunity to learn and discuss from these leaders on PHC. Please use any of the links below to contact us:

Hit enter to search or ESC to close